"In the meanwhile a new creature has settled in the woods - a witch that probably has something to do with the horde of zombies. Defeating the nasty lady will temporarily hide your base from the sight of monsters, for, by hearsay it is she who summons the undead and control them. As you might have already guessed, the new enemy is not so easy to fight, and only the most experienced and skilled survivors will manage to beat her down. Equip yourselves with guns, explosives and first-aid kits and go to check if it’s true. Avoid getting too close to spiky plants on your way, they can harm you."

"There are also some other things to consider during the battle. Firstly, the witch can summon help from crawlers. Secondly, she can recover her health. Pay attention to the insidious hag - she is much more agile, than the usual enemies and likes to play tricks to protect the horde from survivors."

"After the victory over the witch, zombies will stop attacking for 72 hours, and there will be a timer over the infected forest showing how much time is left before the next boss respawn. However if the crowd of the walking dead are already on their way, they will reach your base as usually. With any luck, you can get a trophy from the witch, which you can place at the home location. As long as the torch is burning, the horde won’t come out of the infected forest, which is why you have to feed the fire with logs, planks and coal just like workbenches to keep it going." (from DevBlog 05/25: Anniversary update.)

The Witch is a special boss-type zombie located in the Infected Forest and the Pine Bushes. She is the 2nd infected creature to walk on both hands and legs, the other being The Big One. This is also the first female infected discovered. It usually coexist with gore pools for the sole purpose of defending it. Speculations suggests that this monstrosity is the cause of countless incoming hordes of undead roaming around the land.

Upon death, her head can be looted as a trophy and can be placed in your base to ward off Horde attacks as long as you keep it burning with logs and charcoal. Note that, if a Horde attack is already on its way the moment you've placed the Witch's Head on your base, the Horde attack will proceed normally. 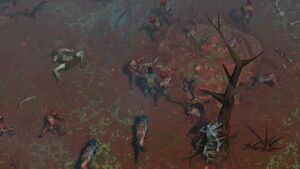 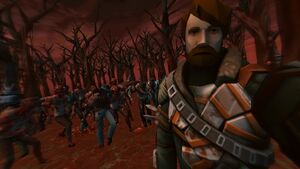 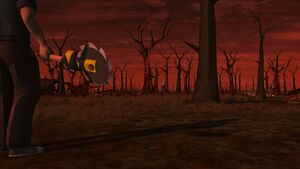 Something is going to break out.
Add a photo to this gallery
Retrieved from "https://last-day-on-earth-survival.fandom.com/wiki/Witch?oldid=50192"
Community content is available under CC-BY-SA unless otherwise noted.