The Toxic Spitter is a special zombie type found in the game (usually in yellow and red level zones). It has two attacks, a special attack - a toxic spray that comes out in a cone and damages everything within that cone - and then a normal attack.

Toxic spits are avoidable by moving out (usually to the side) of the red cone zone before the spitter spits.

The attack damage is 10 at Bunker Alfa in Normal Mode and 15 in Hard Mode. 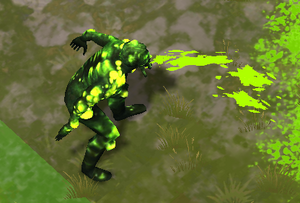