The Blind One is a boss-type zombie added in version Beta v.1.6.9 and can only be found on Bunker Alfa's 3rd floor while Hard Mode is activated.

The Blind One will show a red arrow pointing in the direction he will charge. He then runs quickly and smashes into the wall in his path, leaving him temporarily stunned. Getting caught in the charge path is fatal.

The Blind One will feast on dead bodies in his room, and he will regenerate to full health if uninterrupted; he then roars.

While feasting on dead bodies, The Blind One can be distracted by activating the alarms in his room.

After charging into a wall, The Blind One will be temporarily stunned and will receive more damage.

Tip: Turn on the nearest alarm when he's just begun feasting on dead bodies to interrupt his regeneration. He feasts on the left at 700 hit points and on the right at 400 hit points. Note: you can only use each alarm once. You must use the other alarm to distract him the second time he feasts.

Tip: The Blind One is obviously blind, so he can be snuck up on and hit multiple times. 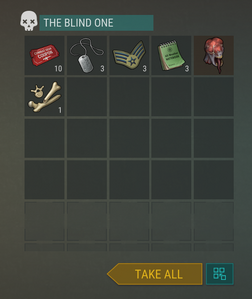 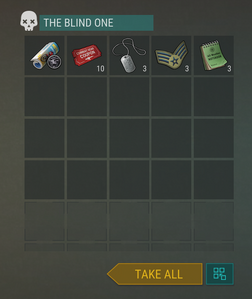 Add a photo to this gallery

Retrieved from "https://last-day-on-earth-survival.fandom.com/wiki/The_Blind_One?oldid=50274"
Community content is available under CC-BY-SA unless otherwise noted.