"A smoothbore firearm usually used by police units for assault."

The Shotgun is a firearm weapon that has the second highest damage of any weapon in the game, but a slow firing rate. It can be obtained from the Dealer through Weapon Crate, from the coupon boxes on level 1 of Bunker Alfa, or bought with Zombie Warfare or Walking Dead Hunter's Pack, Rare weapon. Also, the Smugglers' Camp and Wrecked ship can hold them in containers.

It can also be rarely found as a loot in red zones.

The Shotgun shoots like a Zip Gun but does massive damage at the cost of a slow firing rate. It can two shot most enemies and kill AI players effectively without greatly degrading their armour. It can be used on Frenzied Giants, where it only does 30 damage.

On the Recycler, a Shotgun can be recycled into Spring, Factory Parts, Carbon Composite, and Blueprint for Shotgun in 1 hour at an appropriate level of Firearms recycling skill. 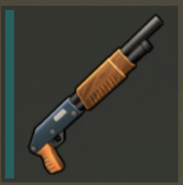 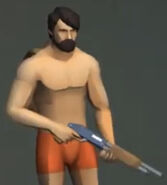 Red Dot Sight
Add a photo to this gallery
Retrieved from "https://last-day-on-earth-survival.fandom.com/wiki/Shotgun?oldid=50464"
Community content is available under CC-BY-SA unless otherwise noted.