Before Beta v.1.8.2, the Rusty Vehicle was simply an atmospheric element, along with damaged high-voltage or telephone poles, gas or oil drums, and other weathered detritus left over from human civilization, occasionally appearing in resource zones, as well as other outdoor areas like bunker entrances, watchtowers, Rest Stop events, et cetera.

Since Beta v.1.8.2, the Rusty Vehicle in resource zones can sometimes appear on the minimap as a loot container.

The Rusty Vehicle with a Rusty Engine inside can be found in resource zones, including:

Once the Rusty Vehicle is opened, the player can carry the Rusty Engine found inside to their Chopper (or ATV, in the future) to be transported on the heavy baggage rack to their home base.

Note: The Rusty Engine can only be brought home on a vehicle; it cannot be carried home by hand.

Once home, the Rusty Engine can be recycled with the Mechanics skill on the Recycler.

Note: Once placed on the Recycler, it cannot be removed until it is fully processed. 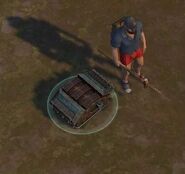