As of update Beta v.1.5.3, you can break into your neighbors' houses using a hatchet. Take note that to break a wall requires one hatchet (one destroyed wall = one destroyed hatchet).

Here's a list of lootable items in the houses:

Base on the right side of Bunker Alfa:

As of update Beta v.1.7, a new raiding system was added, enabling the player to invade another player's base. The Raiders' station will first appear on the CB Radio five days after you build and place it.

When you accept the Raiders' offer on your CB Radio, three Raiders appear at your home base. They present you with five tasks to complete before they will feed you target coordinates to raid. (Complete all raiders' tasks to get coordinates of someone else's base)

"Want a deal? I'll mark another survivor's base on the map. You can take anything you find there, but I'm gonna get my share for the lead. If you agree, first there's somethin' you do for us." - Raider

These tasks may include any five of the following possibilities (14):

Refuse does not refresh the tasks, but it does reset your progress toward completing them.

These 19 new tasks may include any five of the following possibilities:

These 3 tasks was removed from the game.

"Look at the map! I put a mark there. Don't forget to take a backpack, tools and some big gun." - Raider

After completing the Raiders' tasks, the player then has the option to raid another's base within an 8-hour window. Acceptance opens your base to raiding as well; ignoring their offer on the radio does not.

Crafting tools makes noise on raids, so there are two options:

In the raided base, there will be a danger warning meter with a skull icon near the player's avatar to indicate the risk level, relative to noise and getting noticed. As of version Beta v.1.7.8, the meter comes with a numeric indicator for the current level.

Noise is created by tools' damaging walls and furniture as well as non-silenced weapons' being fired at zombies. The noise meter also rises when you leave and re-enter the base and when you craft items on site (for example, hatchets, bandages, etc.).

When the noise meter reached 60-65, the player said "It's getting dangerous here." to cautions when reached 100, The Big One will spawn.

At certain thresholds, zombies spawn in:

Raiders' Cut of the Loot

A certain amount of any item(s), whether actually raided loot or the player's own, is expected to be shared with the Raiders upon your return home.

Different Items have different value. Raiders have 4 levels of satisfaction depending on what items you share:

Based on the dialogues above, here is a table of relative satisfaction values for some items, given that Plant Fiber is 1:

This contribution will be reflected in Reputation (out of 200) when the Raiders visit you next time you call them.

If the Raiders are shortchanged, they will take their share themselves, by raiding your home base two hours later.

Three raider wearing full SWAT armor, one breaking walls, two protecting him with VSS Vintorez. They heal if injured and leave after breaking a few walls and taking what they find, reminding you to pay your fair share next time. They say, "Don't play with fire, pal," and "Next time make a fair share." How hard you are hit may depend on your level, the quality of your base and loot, or the quality of the raid you shorted them on. You cannot revenge raid the Raiders; they do not leave footprints.

The Raiders cannot destroy level 4 and 5 walls, and can only blow up 4 stone walls.

After raiding yourselves, there is a chance you will be raided in return (not by the shortchanged Raiders but by an AI player who received your location from the raiders). The probabilty of being raided is shown by the Threat Of Attack icon on the left side. If this happens, you may have the option to do a revenge raid and retrieve what was lost. The nice thing about revenge raids is that the Raiders do not receive a cut of the loot; you keep what you take.

If the AI raiding you does not steal items of enough value, they may not leave footprints. However, If they leave footprints, you can see them on the Global Map leading to a base for you to counter-raid, accessible for a maximum of 8 hours.

On revenge raids, the mechanics and spawn thresholds are the same as with standard raids; as of version Beta v.1.7.1, The Big One does spawn at max.

Skill levels can be gained under the Base zone-type category while raiding. Some of these skills may even affect the raid you are actively on (ex. Careful); some will have related or unrelated effects. 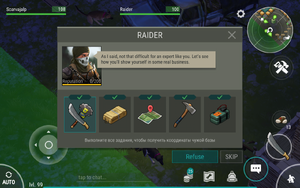