"Want a deal? I'll mark another survivor's base on the map. You can take anything you find there, but I'm gonna get my share for the lead. If you agree, first there's somethin' you do for us." - Raider

The Raider is one of three Raiders that visit your home to make you a special offer...

But since Beta v.1.7.2, you now have to contact them with the CB Radio. If you tune it right, a message from a raider will pop up occasionally.

If you accept the offer, raiders will appear at your base.

You need to do 5 tasks for them in order to do a raid.

After you raid the base, they will come back to get their share.

Everytime you finish the task and give them their share, your reputation will increase. 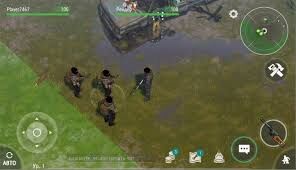 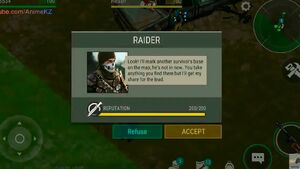 It's possible to meet raiders as enemies in some event locations such as Crooked Creek Farm or Oak Clearing. They are commonly armed with melee weapons such as a Baseball Bat, Machete or Shovel. Sometimes they also care firearms like a Zip Gun (common), Glock 17 (rare) or Assault Rifles (very rare). They wear armor of tier 1 and 2, often reinforced.

Apparently, the raiders called to your home base with the CB Radio can be killed. However, you'll need about one hundred Land Mine since one mine does one damage to them.

After they die, you can only loot the two raiders' dead bodies standing aside the middle front one. Loot includes, VSS Vintorez, Basic Backpack, Raider's mask and enforced armour set.

You cannot loot the dead body of the raider at the front middle. If possible, loot would include, Milkor MGL, Military Backpack, Raider's mask and enforced armour set.

Once they are dead, a new trio immediately appears.

Note: it's not guaranteed that you'll loot their bodies.