"Powerful weapon for eliminating the enemy on a large area"

The Milkor MGL is currently the most damaging weapon in Last Day on Earth: Survival. Upon firing, it will create a blast radius then will explode in one second, dealing 200 Damage to enemies without armor. This weapon currently has the lowest durability of all other weapons, so it's not a good idea to equip only this to fight.

The Milkor Multiple Grenade Launcher (the initials for MGL) also uses up its durability whether there are hostiles around you or not, so only use it only when absolutely necessary.

It can destroy Resource Nodes such as Pine Trees and Limestone Rock but removes the ability to gather anything from them.

It deals 200 Damage to Enemies and to yourself if you're also inside the danger zone. If your Impregnable skill is maxed out, it only deals 80% (160 Damage) to yourself. These damage are subject to damage reduction caused by the enemies' and your armor. Armor and Impregnable Skill work multiplicatively

The Milkor MGL is a very effective weapon if used correctly, it can make quick work of the Ravager, The Witch and the most useful weapon if you for some reason want to take down The Big One*

This is used to damage enemies within the blast radius. It is recommended to lure enemies to chase you, then to go crazy and constantly fire away. Also, wear SWAT Armor or Kevlar Armor if you are using this weapon because chances are you are going to get hit depends on if the danger zone (red circle) go near you or has you in it. So bring First Aid Kits, Bandages, Food, and at least 2 sets of SWAT Armor.

On the Recycler, a Milkor MGL can be recycled into Spring, Factory Parts, and Carbon Composite in 1 hour at an appropriate level of Firearms recycling skill. 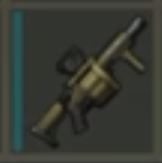 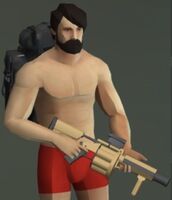