Maze is an event location on the Global Map during the Season 16.

There are two NPCs in the Maze, one is the keeper who is at the Maze entrance, and the other is Daryl. The keeper cannot be interacted.

Extinguished fires are blocked by several obstacles. Some obstacles require Hatchet or Iron Hatchet to cut obstructing trees or vines. Another obstacle require Pickaxe or Iron Pickaxe to mine through a blocking Limestone Rock. Sometimes, the player is required to go through a basement door. There are also thinned out hedges the player can pass through.

Daryl can be found in the Maze. By interacting with him, the player can choose to depart and go to the Maze entrance.

There are four total loots including the locked chest. One is the chest outside the keeper's house where the locked chest is located. The other one is also a chest randomly found in the Maze. And the last one requires Shovel to be looted. 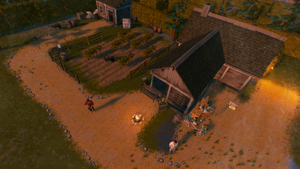 Maze from Devblog
Community content is available under CC-BY-SA unless otherwise noted.
Advertisement