Set of tools for crafting and assembling weapon modifications

"Set of tools for crafting and assembling weapon modifications"

The Gunsmith Bench is a Workstation built at the Home base.

“One day will come in handy”
– Gunsmith Bench description after Beta v.1.8.2

In Beta v.1.9, the Gunsmith Bench's mechanics has been changed to weapon modification and crafting, which includes most melee weapons as well. The larger table of the Gunsmith Bench allows the player to attach/detach finished weapon attachments or modifications and also preview weapon stats, while the smaller table allows the player to craft the weapon attachments and modifications. Once a modification is finished, it may be attached/detached to its corresponding weapon for free and an unlimited number of times, but detaching an unlearned weapon modification cannot be undone.

Note: The Developers changed the required materials in version Beta v.1.9, thus making it easier for players to finalize Gunsmith Bench. However, if you've already invested some resources into the old crafting requirements, they will be lost.

If you change an unlearned mod, you won't be able to set it again

Stats are the specifications of a weapon or tool. You can view stats in your Player UI/Inventory and the larger table of the Gunsmith Bench. Keep in mind that the graph stats on the Gunsmith Bench weapon viewing do not measure weapon stats in comparison to other weapons or tools, but measures how much its stats can be improved or worsened.

Damage: Refers to the damage of the weapon or tool. Bonus damage from modifications/attachments cannot exceed 50% of the weapon's base damage.

Speed: Rate of attack interval measured by attacks per second.

Durability: Longevity of a weapon or tool.

Crit. Chance: Chance to deal extra damage that is calculated by crit damage. In Beta v.1.9, crit chance has been made innate in all weapons that can be modified; before the said patch, crit chance could only be obtained through events, unique weapons, and Wall. Sector 7's missions. In Beta v.1.9.2, crit chance has been removed on unmodified weapons. It is unclear whether crit chances are lowered on enemies with higher defense, but the chance to crit on enemies is definitely lowered in Bunker Alfa's Hard Mode.

Stability: A stat unique to automatic firearms added in Beta v.1.9 which decides the chance of hitting your target. The higher this value is, the less base chance of missing, the longer it takes for the miss chance to peak, and less peak percentage of missing. It is unclear whether it also decreases the time for a gun to recover from its peak miss chance. It also is harder for automatic weapons to hit enemies with higher defense. Note: Each automatic firearm has a different base and peak stability stat, except for the minigun, which cannot miss.

Range: The maximum distance a weapon is able to hit an enemy. This stat does not affect stability for automatic weapons.

Noise: Amount of noise made by a weapon. This stat has the most importance in Raiding due to the noise level made in combat, other than that, its only effect on gameplay is the hostility of enemies beside the target that gets attacked by you if you are outside of normal aggro range or in sneak (if your weapon has no noise it will not aggro the enemies near the enemy you are attacking). It is a boolean value, meaning a weapon can only have noise or it does not, there are no levels in-between. It is also possible to have a firearm equipped with a silencer make noise in Raids due to having a modification/attachment that increases noise (albeit the audio stays the same).

Weight: Refers to how heavy a weapon is. Since Beta v.1.9, all weapons have weight while being carried, although some are too light to have a tangible effect.

Note: Used guns garner the same amount of output, so it is best to recycle guns that are close to breaking.

On the Recycler, a Gunsmith Bench can be recycled into a Scrap Metal, Aluminium Bar, and Rubber Parts in 10 minutes and 1 second at an appropriate level of Other recycling skill. 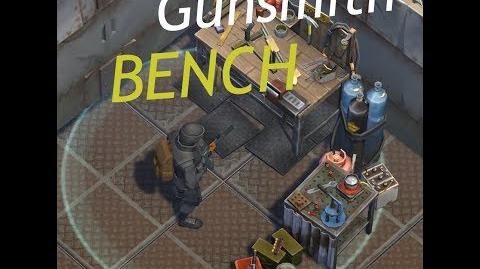 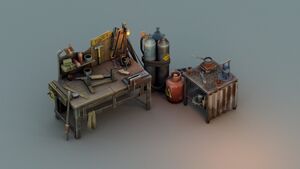 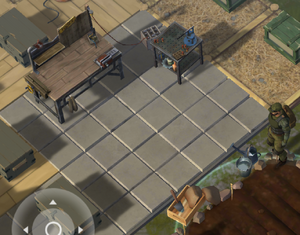 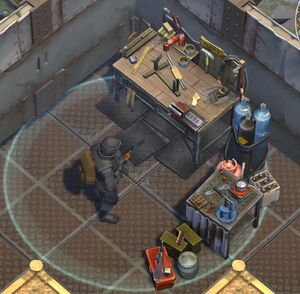 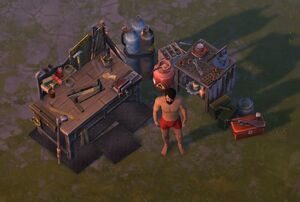 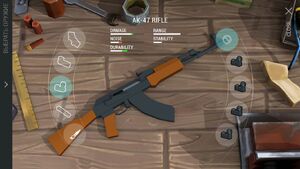 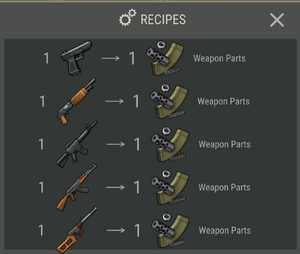 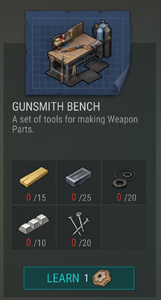 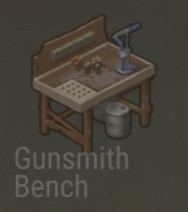