watch 01:30
What is the Frenzied Giant?
Do you like this video?
Play Sound

The Frenzied Giant is a zombie that was introduced in Beta v.1.5. It has 500 hit points and a devastating attack that can kill a player in one hit if the player is not sufficiently protected. However, being bigger than a Floater Bloater, it is much slower.

Players should wear at least a Thick Clothes Set (Tier 2 Armor) and health higher than 100 if planning to engage a Frenzied Giant. Melee weapons are NOT suggested against this zombie, unless wall tricking. Ranged weapons are the best option. Bows are the cheapest way to kill an FG, but players will need patience. After Beta v.1.7.3, the Bow does minimal damage (2-3 DP) compared to its previous max effect (17-20 DP).

The attack damage is the same at Bunker Alfa in Normal Mode and Hard Mode.

But it also has 10 Armor in Hard Mode, except the Caged FG found in floor 2.

These Frenzied Giants only deal 30 Damage but with 2 special attacks: 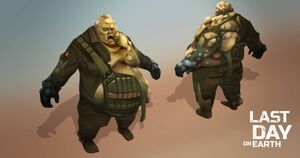 Add a photo to this gallery
Retrieved from "https://last-day-on-earth-survival.fandom.com/wiki/Frenzied_Giant?oldid=50159"
Community content is available under CC-BY-SA unless otherwise noted.