“Weapon for making your own firework”
– In-game description

"Weapon for making your own firework"

"Best choice for firework fans. Take it if you are one of them." - Nick Santy

The Flare Gun has the same attack speed as the Zip Gun while causing greater damage--up to a total of 100 dmg over the duration per discharge.

The Flare Gun is a good weapon for taking out zombies; in addition to the initial 10 damage from the shot, it sets the target on fire, which does another 6 rounds of 15 damage each, for a combined total of 100 dmg, and also works great against Turrets, as they cant move. 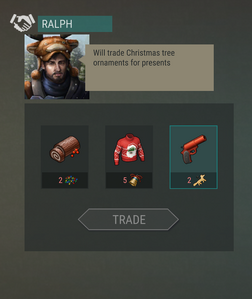 Add a photo to this gallery

Add a photo to this gallery
Retrieved from "https://last-day-on-earth-survival.fandom.com/wiki/Flare_Gun?oldid=51477"
Community content is available under CC-BY-SA unless otherwise noted.