View source
watch 01:30
What is the Chopper?
Do you like this video?
Play Sound

Allows to assemble a Chopper

“Allows you to build a Chopper to move faster on the map.”
– Blueprint description

"Allows to assemble a Chopper"

The Chopper is the first vehicle that can be unlocked once the player reaches level 6.

The Chopper is a motorcycle that can be used to accelerate transportation to other Locations, using Gasoline. It enables travel to the Rest Stop event, and also can be driven in zones but gasoline will still be used.

Completing the Chopper consists of two phases. The first is crafting the "structure" in your base. The second is assembling the Chopper itself, which requires additional components.

Since Beta v.1.17.3 you can use a chopper in multiplayer. You can change the Pattern of the chopper if already unlocked in single player, spend 10 Counterfoil.

"Personal transport is not just prestigious but also the only excisting way to reach the most valuable resources far away from the Crater."

Note: Engine Parts can be found inside Bunker Alfa Coupon Boxes, Other survivor bases, one in AI base and Airdrop.

You can find your first (But only one) Engine Part in the Bunker Bravo, with an CAC Card B (Common access Card Card B)

With some limited exceptions, Chopper Wheels, Forks, and Gas Tanks can be found in Bunker Alfa's coupon crates, as follows:

Upon finalization of the Chopper, options to paint, fuel, and store items become available in the Chopper menu. These sections are called "Recoloring", "Pour On/Off," and "Baggage", respectively.

The Chopper menu can be accessed when the player stands near the Chopper and taps the Action button. (disclaimer: as of v 1.10.3 this has changed) now you have to walk up to the rear end of the chopper and tap the Action Button.

To use the Chopper for travel in Global Map, a "Drive" option becomes available on the map screen in addition to the previous "Walk" and "Run" (while as of Beta v.1.10.3, the players character will just get on the chopper and you can drive it out of your base) options. Travel time is identical to the "Run" option but faster (no matter which chopper is being used). The default Chopper can carry a maximum of 200 Fuel in its tank, and 4 slots of storage (depending on chopper and its upgrades will determine amount of fuel and storage capacity) Upon arrival at a location, the Chopper is parked where the player enters the map, before Beta v.1.10.3. now, as of Beta v.1.10.3 your character will remain on chopper and will be able to drive it around the current zone that has been entered and can be mounted and dismounted (get on or get off the chopper) as many times as the player chooses. If the player dies in a location, the chopper will either be parked in your garage or outside (depending if you built the garage or not) when the player spawns at his or her base along with its remaining fuel and items placed in the storage slots.

Now, there is a question that quite a few people ask and that is "can someone steal items and fuel from your chopper if they are raiding you?" and the answer to this question is yes they can. the raider (player) raiding your base can steal fuel and any items that you may have left in the chopper you have equipped (using at the moment) storage slots. 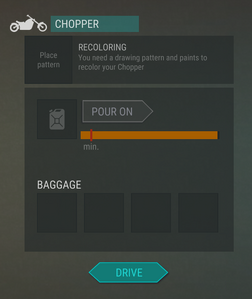 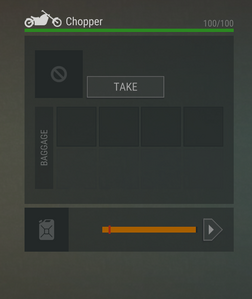 Recoloring the Chopper requires a Pattern in the pattern slot at the top and corresponding Paint(s) color in the player's inventory (disclaimer: this was before Beta v.1.10.3), as of Beta v.1.10.3 you will need to have the following to recolor your chopper:

1: you will need a finalized Garage

3: you will need the chopper pattern desired, (note: you will only have to tap the "use" button when you have a pattern in your inventory only once, then it stays in your garages color pattern forever, as of Beta v.1.10.3 you do not need to collect multiple patterns and keep them in chests anymore)

4: the valid amount of spray cans needed for the pattern (obviously)

The Chopper fuel level can be viewed from either the Chopper menu or the map screen. On the map screen, it appears as an additional bar beside the Energy bar at the top of the screen. The default class Chopper can hold up to 200 Fuel. To drive it is necessary at least 15 of fuel = 3 Bottle with Gasoline.

The Default Chopper contains four slots for general storage, in addition to the pattern and fuel slots, accessed in the Chopper menu.

When/if you die and respawn at your Home base, the Chopper returns with you, with its cargo intact. So in a dangerous situation, you are guaranteed to at least keep anything placed in the Chopper's storage slots. if you choose to take the chopper while its empty, you can still drag the Chopper to the Global Map, it will seem as if you're bringing it with, but if there is not fuel above the red line it will not come with you to a location. Don't worry, if you're going back home and ran out of fuel it will come with, but not when leaving home with it.

Never spend the last bit of fuel in your tank, so you can bring it with for the extra storage even if you're not driving it. You might want to keep some fuel in the "Pour On" slot, so you don't accidentally spend it and lose valuable storage.

The Chopper also has a space for 'Heavy Baggage' on the back of it; this currently allows transport of specific Items, including:

On the Recycler, a Chopper can be recycled into a Common Plank, Scrap Metal, and Bolts in 10 minutes and 1 second at an appropriate level of Other recycling skill. 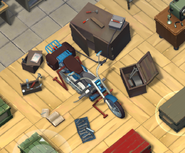 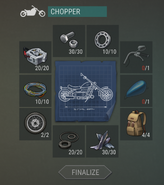