The key cards needed to gain access to the bunkers.

In update Beta v.1.8.2, these cards are a good source of Plastic in the Recycler.

As of the current version, only Bunker Alfa and Bravo can be accessed. The dead soldier at the forefront of Alfa no longer has a CAC A and only a Glock 17. Cards for Alfa and Bravo are fairly commonly dropped by zombies in forest and quarry zones, at Airdrop, and in Bunker Alfa. But, CAC A can also be found in a Destroyed convoy.

CAC A can be obtained killing zombies in the green and yellow zone AFTER inviting the raiders to your home.

A Toxic Abomination may drop 1 of any CAC Cards except for CAC Z when it dies. An AI Survivor may also drop cards.

CAC Z is obtainable by defeating The Big One, a feat only possible at a great cost of firearms. There is no use for Bunker Card Z at the moment.

On the Recycler, a CAC Cards (A-Z) can be recycled into Plastic in 10 minutes and 1 second at an appropriate level of Other recycling skill. 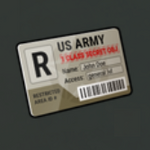