View source
watch 01:31
What is Bunker Bravo?
Do you like this video?
Play Sound

Bunker Bravo is one of the abandoned Army bunkers on the world map. On the main level, resources, Items, or Creatures do not re-spawn once taken or killed. As of Update 1.15, the bunker currently has 4 subfloors. Bunker Bravo has six military lockers on its main floor. All the lockers from the main floor are refreshed on update 1.15.

The outside area of the main level consists of 22 Dead Trees. Only until Beta v.1.15, CAC Card B isn't required to access the Main Level. There will be a group of raiders and a group of soldiers fighting each other until the raiders overtake the soldiers and clear your way into bunker bravo.

Like Bunker Alfa, several lockers containing Items are inside. As mentioned previously, any items at this location do not reset. While this prevents returning for new loot, it allows the area to function as a separate storage location from the player's Home. In order to open the bunker, you have to bring an Electric Generator.

Take as many healing supplies as you can. Basic firearms, like the common Glock 17, isn't advised as it does not do enough damage. AKs are always advised even though at least the second floor can be done with M16s only. The more modded guns you use the better. FN Scars are the best for final boss rooms.

Bunker Bravo is one of several Army bunkers that can be found on the Global Map. It consists of a ground-floor level and four sublevels that can be accessed once you place an Electric Generator. This is the hardest one. You have to be very careful, actually extremely careful.

The outside area of the main level contains 22 Pine Trees. First-time access to the Bunker's interior requires a CAC Card B, which is possible to acquire from loot boxes or enemies at various zones on the Global Map. After using the access card, this area will remain unlocked permanently.

To access the underground levels of Bunker Bravo, an Electric Generator must be placed into the computer terminal in the main building on the ground floor.

The sublevels of the Bunker function differently from the ground floor.

Until reset, all progress is saved, including enemies killed, items looted, and the corpse of the last player death. However the radiation level is saved as well. Which means you'll need to restart the whole level if you die and want to start again. If you do not restart it the increased radiation is bound to get you during your second run.

Like Bunker Alfa, the first sublevel serves as a lobby area with a few features relating to the lower levels, including a list next to the elevator that serves as a directory for the three floors below. There are also 3 cargo loot boxes on each floor. Unlike Bunker Alfa, players only need to press a button on the cargo loot elevator to get the loot instead of amassing coupons for an exchange. Each floor gives different loot.

From the 2nd floor the player usually gets:

From the 3rd floor player usually gets:

From the 4th floor player usually gets: 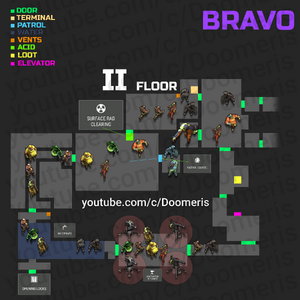 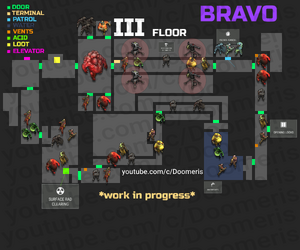 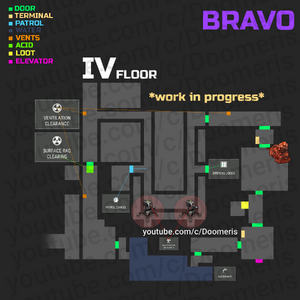