Simple ranged fight weapon that helps the shooter not to attract much attention.

“Simple ranged fight weapon that helps the shooter not to attract much attention.”
—Blueprint description

"Simple ranged fight weapon that helps the shooter not to attract much attention."

This weapon was released in Beta v.1.5.8, which seems to be as a direct result of it being requested by fans.

The Bow is unique amongst weapons in that it does a variable amount of damage depending on how long the button is held before being released.

At the fastest rate of fire it does 8 damage every ~1 second. The longer the button is held, the more damage is done once the bow has been drawn up to 19 damage after ~2 seconds. However, if the button is held for more than ~2 seconds, the shot will miss its target.

Note: These timings are estimates. Experimentation or inspection of the code is required to get accurate timings.

Note 2: If you watch the animation of the bow being drawn, you can see the arrowhead move back to full drawn, then forward slightly, then back again. If released immediately after this second backward movement, it appears to provide highest damage (tested against Frenzied Giants, reliably giving 7 damage each time).

The bow is very useful against slow zombies, and excels against Frenzied Giants.

It breaks after 50 shots, thus its is possible to do 950 hp damage with one bow but very unlikely. With practice, players can reliably get 17 damage.

Currently the Bow seems to do less DPS than the Spear, even without the Spear's sneak attack bonus. It seems likely that the Bow's statistics will be tweaked.

It is shown off in this video:

On the Recycler, a Bow can be recycled into a Pine Plank and Duct Tape in 10 minutes and 1 second at an appropriate level of Melee Weapons recycling skill.

3D model of a character holding a bow 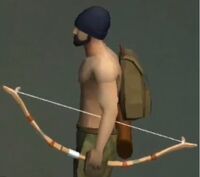 New model after Beta v.1.9
Add a photo to this gallery
Retrieved from "https://last-day-on-earth-survival.fandom.com/wiki/Bow?oldid=41104"
Community content is available under CC-BY-SA unless otherwise noted.